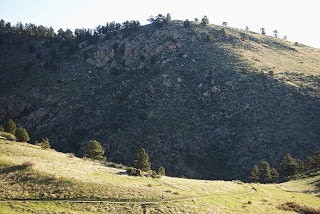 "You're on the Highway to Hell" the signs read lining the trail on the return trip up Mill Creek, one of the steepest climbs on the course which lands around mile 34 right in time for the hurt to start setting in.  This was my 4th time running QR50, and I couldn't help but smile at the signs because I was actually feeling pretty solid at this point as opposed to others years where it did truly feel like the highway to hell.  My Coach John Fitzgerald was waiting toward the top part of the climb leading up to Tower's Aid Station at mile 35, and dumped a ice cold water bottle down the back of my shirt which as the temperature for the day was creeping up into the low 80's (really not that hot but when you were shoveling almost 2 feet of snow from the driveway 2 weeks earlier, it feels pretty darn hot) made me feel like a brand new person.  The signs reminded me of one of my favorite AC/DC songs and life mottos "It's a long way to the top if you wanna Rock and Roll!"

Leading up to QR50 I had a really strong buildup to run Chuckanut 50k in Bellingham, WA only to pull the plug the day before flying out due to some lingering hip tightness that had started a couple weeks out from the race.  I was really excited to run Chuckanut and it was a really hard to call to make but knew that I would most likely ruin the rest of my spring/ summer of racing if I pushed through with the race.  After taking a week and a half completley off, and a week and a half of slowly working the kinks out I was back on track with time for a good block of training leading up to QR50. Injuries are hard, it's what makes a lot of people hate running so much but they are such a good time to reflect, learn, and hopefully come out the other end a stonger runner and person.  That being said, I hadn't run QR since 2014 and I was really excited to get back to one of the races that holds a special place in my heart in my own backyard here on the front range of Colorado. 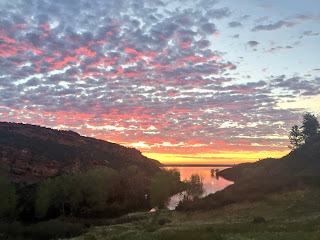 It was really an amazing morning starting out the race.  The temperature was just chilly enough that you were ready to get running to warm up but perfect once you got moving, the beautiful sunrise reflecting off Horsetooth reservoir, really just the quintessential spring day on the front range.  The lead group of myself, Dan Meltzer, and Frank Pipp moved out to the front of the pack, I could hear the solid field of the lead group of ladies close behind chatting and laughing up a storm.  I was really excited to watch the ladies race unfold throughout the day.  Dan took the lead on the first climb up to towers aid and Frank Pipp and I settled in a bit behind, I was excited to get a chance to talk with Frank and congratulate him on his recent win at the Salida Trail Marathon.

After coming off the top at Tower's aid Station and heading down the Spring Creek Trail I started to let the legs roll a bit on the downhill and pulled a bit ahead of Dan leading down to the Horsetooth aid station around mile 10.  This was probably the most beautiful part of the day, the new section of trail took the course up onto a ridge line that overlooked the reservoir and then wrapped around a really neat rocky midslope trail that meandered down into the drainage leading out toward the aid station.  Joe Grant and Paul Hamilton were out providing twitter coverage for the race and then shortly after Ryan Burch was making his way down the trail with some flagging which was really exciting to see some familiar faces from years past that I haven't seen in a while out on the course. From there on in Quad Rock fashion it was run up, run down, repeat, until hittting the turn around at the 25mi finish and then repeating backwards.  I came through the 25 mile turn around at about 3 hrs 35 min, a little ahead of what I had run years past with Dan just a few minutes back and Frank and Gabe Joyes close behind him.  My wife was supposed to meet me at the aid station with all my calories for the return trip but was nowhere in sight when I got there.  Turns out that my elementary level calculation were way off and I had told here to be there at 10am when we actually were coming through at 9am.  Weakness identified and hopefully learned from, logistics, logistics, logistics can quickly ruin your race a point I often find myself blindsided by.  I decided to just push on with coke in my spare 17 oz collapsible water bottle which actually worked out pretty well and I just stuck with for the remainder of the race filling the bottle up with coke at each aid station. 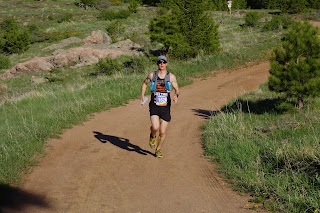 It was starting to get pretty hot on the return trip and I was happy that I was really focused on staying ahead of my hydration on the first half of the course cause I was going through both water bottles between each aid station on the way back and was still feeling like I was just barley keeping ahead of the curve.  The QR course can really get the best of you on the return trip, the climbs aren't crazy steep but they are pretty relentless and in the 3 years prior I had gotten to the final climb at mile 40 and my legs were completely blown and had to hike the majority of the climb.  This year I was determined to be able to run the last climb which really forced me to run the 5 climbs preceding it very conservativley, which I think really paid off as I felt very strong and in controll rolling out of the Horse Tooth aid station into the final climb in the heat of the day. 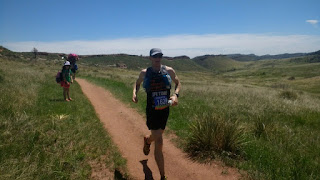 After hitting Towers aid for the last time and descending back into the flats I really wanted to get under 7:40 for my time for the day so was really trying to stay focused and finish strong and not just back off and cruise in.  It gets really exposed in the flats and the trail meanderes back and forth on a single track with the finish looming like a far off Oasis seeming oh so close and oh so far away at the same time.  My wife, dad, and Coach John were at the aid station just a little over 2 miles from the finish and gave me another burst of motivation seeing them.  Every year my dad and wife Jenny have been out along the road cheering me on the last couple miles to the finish which is one of those experiences you know you'll look back on and cherish forever.  Came through the finish in 7 Hr 41 Min runnning the 3rd fastest time on the course and more importantly beating my 28 year old self's time of 7 hrs 46 min, hopefully I can keep on that trajectory :)

Was really pumped with the overall experience of the race and felt solid pretty much all day long which I can't really say that I've experienced before in a 50 Mile race.  The after party was great as always hanging out in the sun and talking with friends from races I haven't seen in a long while and meeting new friends which in the end is really what it is all about.  Quad Rock never lets down and Nick and Pete do such a great job with the race and all the amazing volunteers alway bring a smile to my face.  Another QR50 in the books!

Thanks to The Adrenalin Project for being a badass Team, Carmichael Traing Systems, Scratch Labs, Stance Socks, and Lifetime Fitness, and most importantly my wife for supporting all this crazyness :)

Next stop Leadville 100!  "It's a long way to the top if you wanna Rock and Roll", and it'll be one hell of a journey. 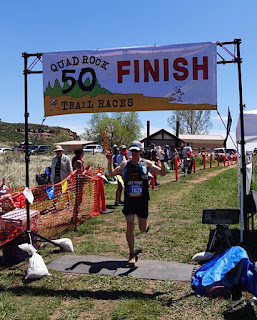 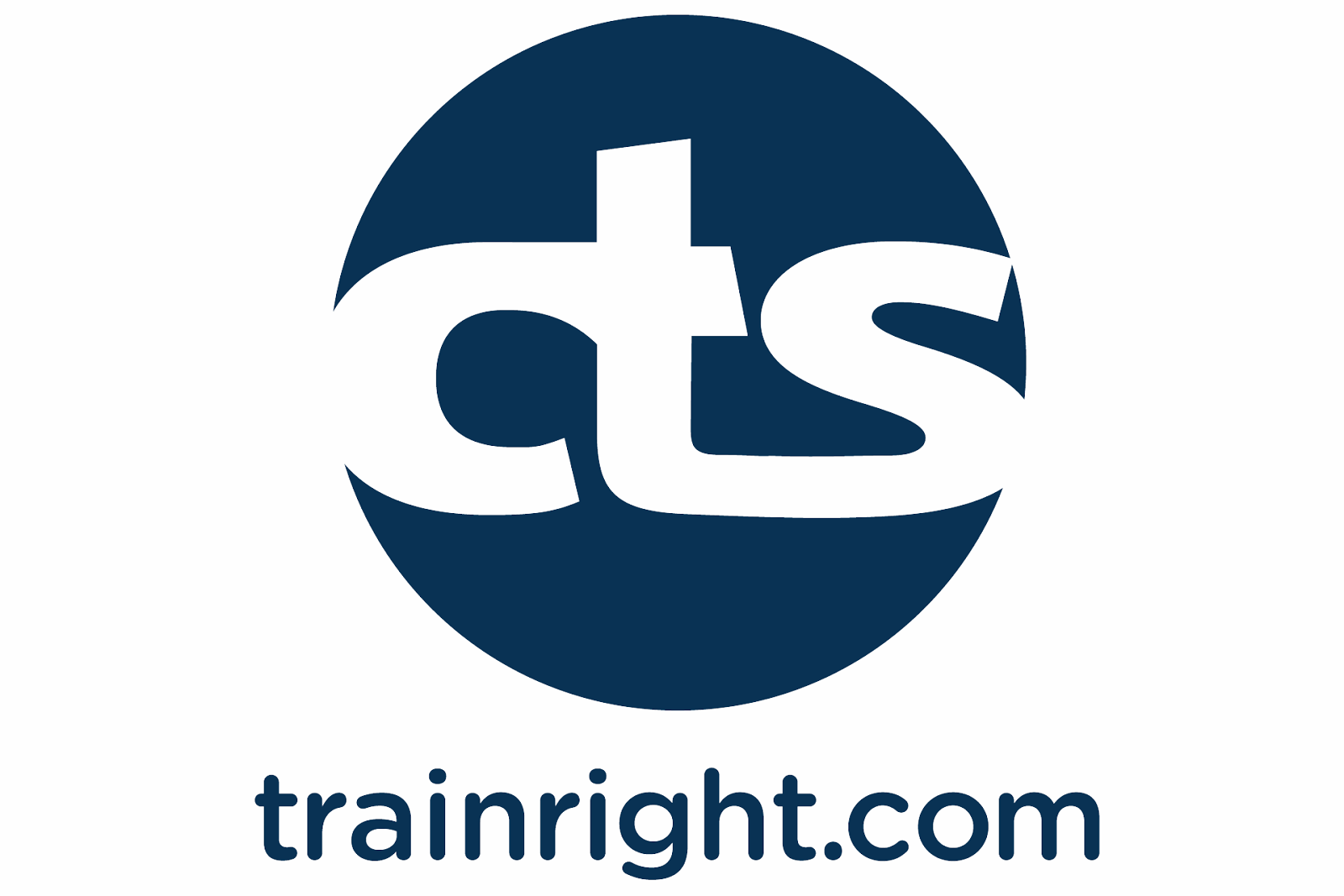